It's been a long time.

Like the title of this post says, it's been a long time, to long, since I posted last. A lot has happened. I've been super busy and life just kind of took over for a bit but things are starting to look better.

Let's see...where to begin...right after my last post I lost my father and my kids finished school. I miss my dad dearly. It's been very hard for me, it was unexpected and sudden. He was and amazing person and I'm still trying to figure out what to do with out him around and missing him all the time.

Surprisingly the kids were amazing all summer long. I think my dad was poking them and making them behave for me. I've never seen them go that long with good behavior. Now that school is back in session the kids are back to being themselves. Good thing, is I finally get some time to work, bad thing - since being back to school I have had each kid home at least once for being sick and one of them twice and it's only been a month. Hopefully that is not a sign of what this year is going to be like.

We adopted a new puppy, Stormie, from a shelter out here. We're not quite sure what kind of dog she is but she is a riot. The vet said she is definitely basinji and the trainer thinks she a little bit of shepard but she also has webbed toes, so who knows. She's been amazing. She was already semi-house broken (she goes outside on schedule but will not let us know via barking or such outside of the schedule), crate trained, sits and has already started playing with our older dog. She started puppy training classes and went to puppy play time, she had to sit outside the gate for that one. She's more of a people dog than a dog dog but the trainer will work with her on that. 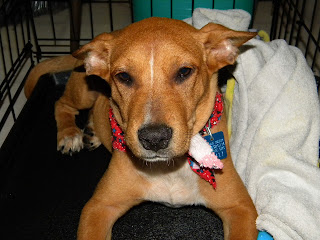 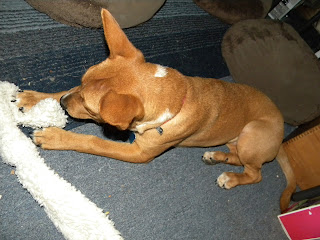 We started construction today on our house. The upstairs bath is getting completely remodeled. Today began the demolition, so it's been super loud between the banging and the dog barking. Shouldn't be long though.

So things are moving along, I recently took the Copic certification classes, both the standard and intermediate ones. Look for a blog post about that coming coming soon. :)

Posted by Crafty Day Dreams at 4:10 PM No comments: