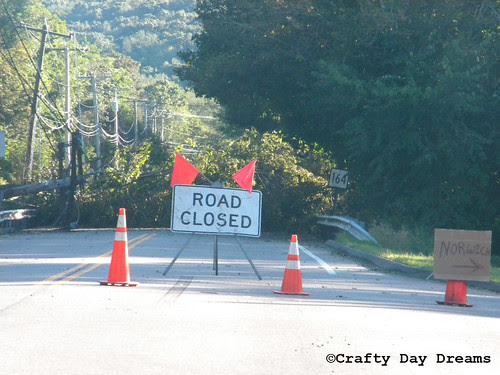 3:08am I'm freaking out! The fear and paronoia are setting in.....It's not hard to tell who's without power and there are a lot of messed up people out there. We've recently had an increase in crime around here, even the quiet part of town, armed robbery, break ins and theft. How long till that really picks up? Not hard to get in when you know people are without power and running generators. I guess the neighbors were smart for taking the time to practice shooting the day before all this happened.

4:31am You don't realize just how dark it is till there is no light. Oh and apparently yelling that you would like to speak to a human at the automated phone recording that the electric company has works out pretty good. Hubby actually got a person, not that they were any sort of help. All they could tell us was that the whole town is out of power and that the crews will be back out to work in a few hours. Ummm...A FEW HOURS??? Hold on a second, half the darn state is without power, why the hell aren't you people working 24/7 till it's freaking fixed? Also there is no estimate of when we will see power back. :(

5:22am I can only doze off for a few minutes at a time. It's so quiet every noise wakes me up :S

7:04amI swear I hear lots of trucks...maybe power...I want to wake hubby up to go into town to see if they actually got power back yesterday and if so stop and get coffee and danish. Real coffee, yummm. To early to wake him though. I haven't slept since I last wrote, I got sucked into another book.

12:28pm Well I did manage to get a few hours of sleep. Woke up at 9:00 and headed out to town. Unfortunately the bakery wasn't open. The gas station had gas though we had to wait 10 min in line to put some gas in the car. Funny how prices are going though the roof. We drove to the next town over to a bagel shop for coffee...sucks having to go though the days without my numerous cups of coffee. We also stopped by the school to fill up the jugs again with water. Came home picked up some more of the yard. Called the cable company to find out when we'd get phone back. They were kind enough to tell us that we will not get cable, phone or internet back until after we have power restored. They said that the electric company has not given them a time line on when that will be and that we are considered a triage area :( Poor hubby's going batty with no power. He has a deadline in two weeks and now he's 4 days behind.

2:18pm It's been fun. Called the town hall "in town" to see where the emergency facilities were so we could get water and showers and such. HA! When the "town" got power back yesterday they closed the shelter. WTF? Our town is completely without power. Gah! Just because the "in town" people have power they close the shelter. What about the 3000+ other households in this god forsaken town that don't have power. We all pay taxes, we are part of this "town" just because people are not staying at the shelter and "in town" has power doesn't mean that the facilities are unneeded by the rest. (In case you were wondering there are many sections to the town. We all share the same zip code and all pay taxes to the same town hall and we all use the same school, buses, etc. We basically make up one big town.) Talking to the first selectman gets us no where. Seems he's just happy "in town" has power back one. He couldn't offer any insight into anything. This is all getting very frustrating. It's hot and humid...I'm stinky and sticky and all I want is a damn shower :\

2:44pm Going out to use the phone upgrade, hopefully to get a smart phone with internet so we can see what the hell is going on out there in the world. :)

7:00pm No go with the phone. I just can't seem to justify the 30 extra dollars a month at the moment. Things are not looking very good. The electric company still will not give us estimates on when we'll be back up and running. They said on the news that they plan to have everyone fully restored by next Wednesday. O.O Umm...Yeah. On top of that the state set rations on gas to where the gas stations are only going to get deliveries of 3,000 gallons per delivery. So if they only get deliveries every other day that's 3,000 gallons every other day. (I see riots at the gas pumps happening in the future if that doesn't change.) The gas station "in town" ran out of gas by late afternoon and they aren't expecting a delivery until late tomorrow or Thursday. Wer'e down to about 6 gallons of gas for the generator. We've been averaging about 2 gallons a day, so that's enough gas for the generator till Friday maybe Saturday if we push it. We are down to 6 gallons of drinking water. No way that's going to get us though to next Wednesday and we don't have much gas in the cars either.

8:10pm Whoohoo! A friend of ours had power back and says that we can use their shower and fill up with water there. Finally a little goo news. 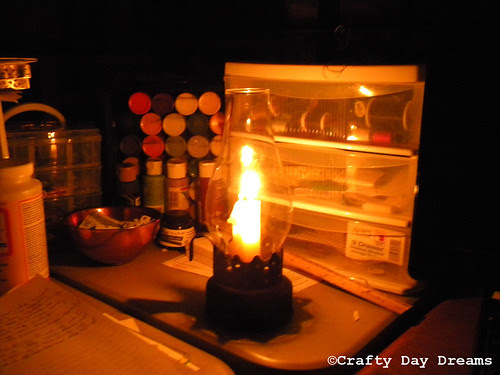