I thought it was going to go really well. Before I fell asleep last night we lost cable but it came back on as I briefly woke up and heard the television back on. This apparently did not last long, as I awoke at 6:34am with no power. Wonderful. At least the kids were still asleep. I took a walk around the inside of the house, no noticeable damage to the house that I could see. I grabbed my daughters radio so we could get some sort of news. Okay tornado watch - they tell us on the radio to look to the sky - sure let me go stand outside in the middle of the hurricane to see if anything is coming...nah I think I'll pass. New reports those without power can be without it for up to five days. Ummm...I don't think the fridge and freezers will stall that long and I don't know what to do. I can't afford to replace two freezers and the fridge. We have a ton of CSA chickens, about 10 in all, and it sucks thinking about loosing all of it.

10:00am The winds outside are so strong you can actually see the wind with all the rain and tree debris it's carrying. We've been hearing trees falling all morning. At last count we've lost 4 trees and an old CB antenna. The kids are finally up and complaining that they have nothing to do. Kids these days don't know how to live without technology. The older child has mental problems and doesn't understand the situation. She insists on playing the Wii (Can you tell they've never been without power before?) and was wondering why all the leaves and branches were in the yard, amazed by the amount of them. I tell them to color, draw, do word find books or puzzle books, play dolls, and read. They have plenty to do but they come back with the "that's boring." They should have grown up when I did.

12:30pm Peanut butter and fluff for lunch. Thinking that the eye must be past us by now but the winds are still strong. We went outside to take a few pictures and still hear trees falling. Hubby said that it looks like a tree sneezed on us with all the bit of leaves and branches ever where. Silly hubby. We did see an electric company car drive by, maybe we will get power back sooner than expected...one can only hope. Kids are holding up. It's been about 8 hours since we lost power.

1:00pm Flipped on the radio quickly to check on things.. Good new: The closest city to us just got power back, which is good because if we need anything we know where to go. Bad news: Our electric company has over half it's customers with out power. :(

4:30pm Going out for a drive to see where there is power.

7:10pm Back from our drive. It really doesn't look good. Up the road trees on lines and down the road trees on lines. I took some pictures of some of the things we saw. Tree across a bridge = bridge closed, down lines sparking. There are trees and lines down every where. The closest place we found with power is about twenty minutes away. One of the grocery stores in the city was open so we stopped in an bought 5 bags of ice. Dinner was breakfast sandwiches from a Dunkin Doughnuts we found with power. Got home an put everything we wanted to keep from the fridge into coolers with the ice. The kids are afraid to go to bed without nightlight so I gave them each two glow bracelets I found an a book light. The news now says a week or so until they expect to get power back to everyone...I wish I knew what to do. There are 650,000 customers with out power. 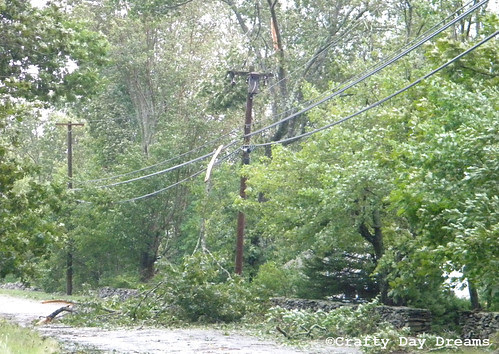 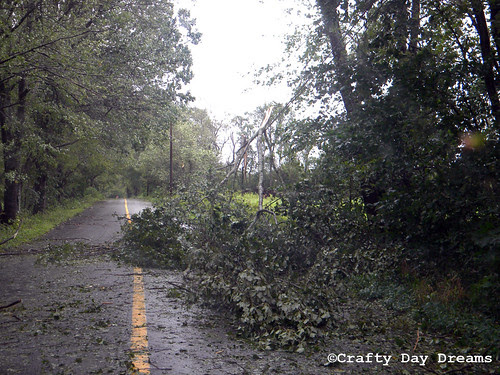 7:40pm It's starting to get dark. We lit some candles and shut off the lantern, we don't want to run the batteries out...We're usually up till 1 am, that's 4-5 more hours...I might go insane from the boredom.

8:37pm The boredom in the dark is so bad the hubby's changing lyrics to songs so they are about how we have no electricity.
Posted by Crafty Day Dreams at 10:10 AM