8:40am We still have no power. The trash men woke me up. I guess that's good, at least they can make it through the roads. I slept like crap. No a/c to control the temperature. It was so humid. I'd get cold and cover up, get hot then toss the covers off. It was back and forth like that all night. I think I figured out a way to check the freezer, we'll find out later. It's amazing how much water you use especially to flush the toilets. One 5 gallon jug is only enough to flush a toilet two times. We've already gone through 8 gallons of water, that leaves us with one 5 gallon jug of toilet water.

9:30am Call to the electric company recording says a week or longer without power. We don't have anywhere near enough water to go that long. Going to head out to see if the local public campgrounds have water, or we'll just fill them in the pond for toilet water. :(

9:48am Oldest child still has program. She'll get to go somewhere where there's power. Hopefully she'll get to eat something there too.

11:00am Found water at the schools outdoor high pressured spout. :) We went down in town and they will have power tonight but because we don't live "in town" we don't have public utilities and there for won't have power for the week or longer. My thought is: What the hell do I pay taxes to the "town" for then? I don't get anything out of it. I pay the same if not more than the people that live "in town" do and I don't get a darn thing from it....no utilities, no public trash, sewer or water, no staffed fire department or police. All we get is a crappy school system. :( (sorry I'm done venting for now) Good news...my parents found us a generator :) We won't loose everything :) 4:12pm Wow, just wow! What a day it's been. We cleaned up some of the front yard till my parents came with the generator. It won't run the well pump :( but at least it will run the fridge and the chest freezer. Dad and I went out to get gas and new gas cans. Ha. That was funny. We found a 5 gallon kerosene can, which we spray painted red so we could use it for gas, and a 2 gallon gas can. Then the fun started...trying to find gas. Every gas station we went to had signs on the pump that read "Sorry no gas." 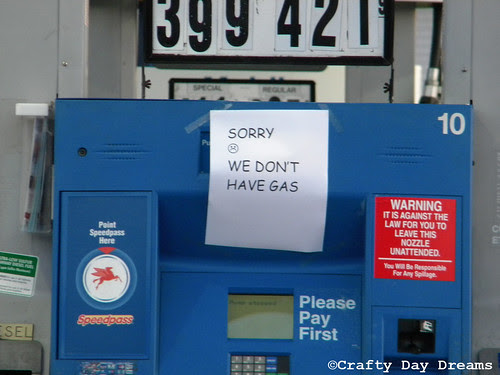 We finally found two stations a ways up the highway that had gas. The lines for the pumps were so long that there were cars out in the roads. One station next to us was actually getting a shipment as the gas station we were in line for was getting signs read to to put on the pumps. We were luck though and managed to get gas before they did run out. Back home the generator is up and running. We saved the food! No water, but we saved the food!!! (can you tell I'm happy about that?) Good thing to for the generator because the freezer was up to 39°F this morning.

8:05pm Put the kids to bed. I have to say that my parents are great and I don't know what I would do with out them. Not only did they get the wonderful generator but they gave us money to go get dinner. :) We drove south to the actual shore (about 15 minutes away.) It surprisingly didn't look to bad where we were. Stopped at Five Guys so we wisely used moms money to fill to the brim on burgers, bacon cheese hot dogs, and fries; because who knows when the next hot food we'll have will be. 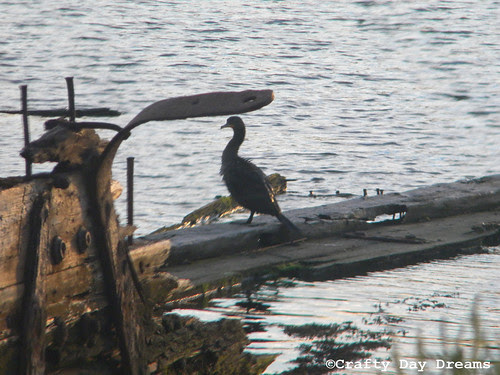 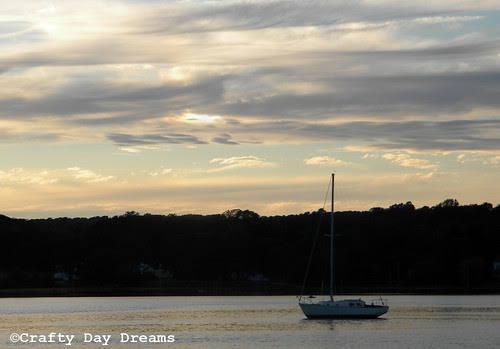 8:54pm OMG! I've just seen the biggest fail known to man. The electric company has a text for update thing so I text it with the zip code. The idea is you get a text back with the updates on outages in your area and information about the outage such as restoration times.........ummm....yeah. I got the following text back: "There are no power outages reported in your area." Are you freaking kidding me!? We've only reported it like hundred billion times. Like I'm sitting in the dark with candles and a generator for the fun of it. 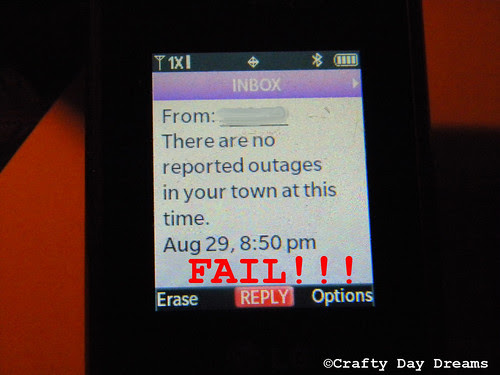 Posted by Crafty Day Dreams at 8:08 AM