Today was an interesting day. Started out with a delay for the kids which I never look forward to, it just throws my whole day way off. Once the kiddos were off I had to head to the post office to ship an order and then to the grocery store. Want to know just how fast gas prices are rising out here? Well I drove by the gas station on my way to the store it was $3.849. I did my shopping and started to head over to McDonald's to grab my one and only shamrock shake of the season and the price was $3.899. That means it went up five whole cents in a half an hour. I refuse to buy gas in my state, I go to the next state over where it's at least thirty cents cheaper. But I digress. It's ridiculous just how fast they are rising. Everyday the gas station raises it's prices.

Anyway, I drove by the gas station (with my eyes bulging out of my head in surprise at the jump in price) and headed to the drive thou at McDonald's. I figured I'd spend my extra points on this shake and only limit it to one for the season. I love the shamrock shake so I'm sad that I only get one but one is better than none. I paid for the order and the cashier gave me back my change. As we pulled away something wasn't right. I looked at my change. The ten dollar bill didn't seem right. We pulled into a parking space and examined it more closely. It was off and something was wrong, it was smaller than my other bills. So we took the bill to the bank. They tested it with all their tests but couldn't find anything wrong except....get this... the whole image was shrunk about 1/8". Well what the hell? If you lined up one border the one on the opposite side was short by about an eight of an inch. Lovely. Now what the heck am I suppose to do with this? The bank didn't offer me a new one to replace this one they just said..you know there have been counterfeit bills circulating in the area lately but the serial numbers don't match those you should be fine but you could take it down to the police and have them look at it. Sigh. (It's already been a long day but I don't want to risk the bill being a counterfeit.) We call the police who come and take my ten dollars. (now I'm broke..sigh) They said that it will be sent to the secret service (pretty darn cool) to be analyzed and if it's real I'll get my ten dollars back and if not I'm out the ten dollars. (OMG! Are you kidding me? I didn't ask to be handed this bill...I better get ten dollars in the mail!) Then he sent us on our merry way.

It's just been one of those days...So I decided to do some painting and playing with medium. 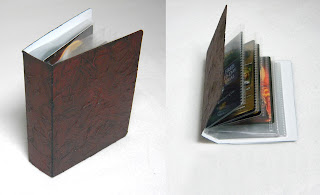