Day 18 - Findings at the Beach

The snow is gone but the wind has come and made it very cold. Staying inside today hubby found an box of wonderful things that we found at the beach. Some shiny rocks, (the kids love those shiny things and they have an infatuation with rocks,) some nice big pieces of sea glass, (do you smell the smoke from the wheels turning in my head?) and of course a ton more shell. I probably have enough shells to open a small shell shop by the seashore...hehe. No all kidding a side I really do. I have boxes and containers and baskets and bottles full of shells...One day I'll have to take some pictures of some of the collection. I think its all that wanting to live on the beach that's got me hording away all of the wonderful treasures I find when I'm there.

I have got to find a way to put all these shells to use. Snail shells are a popular one. I have some of those and conch shells, tons of little itty bitty conch shells. I have a conch shell that's so tiny it will sit on the tip of a pencil. Don't ask how I found that one because I'd swear I was blind but I have it somewhere in one of the containers.

Want to hear a funny story...well not so funny for me...One of my stays at the beach I found this really nice conch shell. It was big, beautiful and all intact. I spotted it floating in on the waves just out a few feet in the water. I immediately went for it. Turning it over to make sure no snail was in there and it was all clear. I was in my glory. I had found the best shell ever. It had a few barnacles on it but those would be no problem to get off. I put it in my bucket along with all the other things the kids had collected and brought it back to the house. Later that night I wanted to clean off all the days findings so I put a pot of water on the stove to boil. Once boiling I added the shells to clean them. The first one I cleaned off was my beautiful conch. I scraped the barnacles off the outside and when to go scrape the sand out of the inside and make sure it was clean all the way down in. Sticking a skewer in the shell it felt like there it wasn't going in as far as it should. There was something stopping it. A big barnacle I figured. Oh did I figure wrong. I was all like "What the hell's stuck up there?" I started jabbing and shaking. I gave it a nice hard shake and this cooked pink hermit crab flew out and into the sink. I screamed and dropped the shell, jumped back about ten feet from where the poor hermit crab lay dead in the sink. My hubby started laughing at me. I was in hysterics. I felt so bad. I swear I checked that shell good before I put it in the bucket...no crab ever poked out at any point in time. I still feel bad to this day for killing the poor, poor hermit crab. Lesson learned...poke shells good first or give them time before you stick them in your bucket.

So with all those shells I figured I'd start off and use a snail shell to start and do some sculpting. I haven't done any sculpting in a long time. It's been a few years. I took some Super Sculpey and made a snail in his shell. I'll back him tomorrow and maybe paint him. 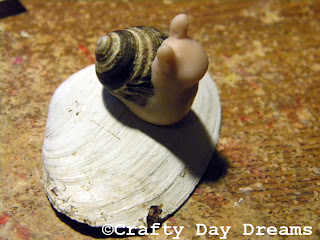 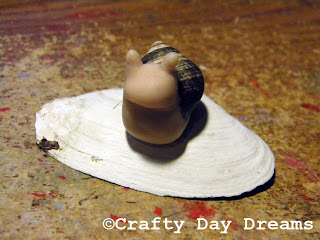