One of my kids is into duct tape...making things out of it that is. There are rolls of the stuff all over our house. I figured I'd attempt to do a journal recover using some. We had some tye-dye sheets of duct tape in the house. Let me tell you it's definitely not as easy to work with as I thought it would be. It's super sticky, sticks to anything and everything and very, very unforgiving. It creases easily, sticks to itself and you, you can't do a darn thing about it. I thought that having a backing on the sheet would make it easier to use...hell no. I tried cutting out the middle where the cover would be laid so that the edges were still masked off by the backing. Trying to lay the cover exactly in the cut out wasn't easy it didn't go well and then it creased on the cover and there were air bubble. The second cover I took the whole backing off and placed the cover down in the middle just by eying it. That one went better but I don't see myself ever making a ton of things out of this stuff. I found it really frustrating to work with. Anyway here's the book: 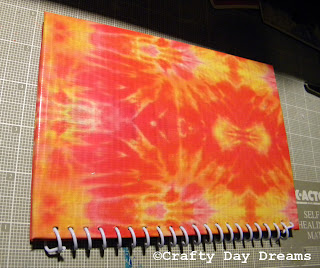